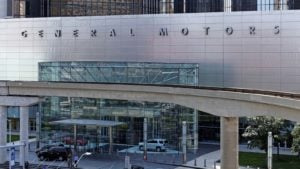 In the late stages of the bull market, irrational exuberance caused investors to bid electric vehicle stocks up to ridiculous valuations. Then, fears of rising interest rates and an economic slowdown caused the bubble to burst. Shares of EV companies, many of which were unprofitable or barely profitable, came crashing down. Even the best electric vehicle stocks have sold off 50% or more over the past 12 months.

But this is not a sector investors should count out. California recently reported that nearly 18% of its vehicles sold are now EVs. Electrek Editor-in-Chief Fred Lambert predicts that electric vehicles could account for almost 40% of all vehicles sold in California in 2023. Not only is California a large market in its own right but, historically, the rest of the U.S. often embraces trends first seen in California.

Meanwhile, the federal government has pledged billions of dollars to advance the adoption of EVs, including $7.5 billion to build a network of 500,000 EV chargers across the U.S. and incentives for EV buyers. Moreover, many corporations are seeking to electrify their fleets in an effort to reduce their carbon footprint.

Add it all up and you have a sector with a huge growth runway that is offering some screaming deals following a massive selloff. Here are the best electric vehicles stocks to buy now.

Legacy automaker General Motors (NYSE:GM) is making a big push into EVs and quickly growing its market share. In a letter to shareholders accompanying the company’s third-quarter earnings report, CEO Mary Barra said GM captured more than 8% of U.S. EV sales during the quarter thanks to its popular Chevy Bolt EV and Bolt EUV.

In response to strong demand for the Bolt EV and Bolt EUV, GM intends to produce a combined 70,000 of them in 2023, up from around 44,000 this year. It’s also planning to introduce some higher-value EVs to the mix, including the Chevrolet Equinox, Silverado and Blazer, and the GMC Sierra EV.

GM blew past analysts’ profit estimates when it reported third-quarter results, producing $2.25 in earnings per share compared with an expected $1.88 a share. Revenue came in a bit light, but was up 56% year over year to a record $41.9 billion. And management reaffirmed its guidance for the full year.

GM stock has held up better than many of the pure EV plays, down around 32% over the past year. Following the latest earnings announcement, JPMorgan increased its price target on shares to $59 from $58, implying upside of 52% from current levels. The analyst also reiterated his “overweight” rating. 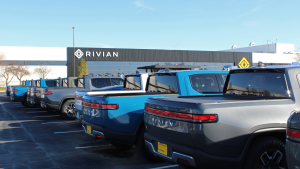 Shares of Rivian (NASDAQ:RIVN), a maker of sporty electric pickup trucks and SUVs, have lost 70% of their value over the past year. The stock sold off sharply in early October when the company recalled about 13,000 vehicles due to a possible loose fastener. However, the company was quick to address the issue, and shares are trading back above pre-recall levels.

It seems the initial selloff was a knee-jerk reaction, with a Mizuho analyst calling the recall “relatively minor” and noting that management expects the cost to be “minimal.” The bank maintained a “buy” rating on the shares and a $65 price target, which is 88.5% above the current price.

Also noteworthy is that RIVN continues to work to improve its existing EVs using over-the-air software updates. For instance, it recently enhanced security systems and now allows the height of the vehicles to be adjusted to make it easier for passengers to get in and out. Another feature called “Camp Mode” makes its EVs more level for sleeping and gives owners the option of turning on flood lights.

Assessing Rivian’s R1T pickup recently, auto reviewer Edmunds wrote, “The Rivian R1T is an incredible first effort from a startup and stands out with its distinctive styling, clever storage and muscular power.” 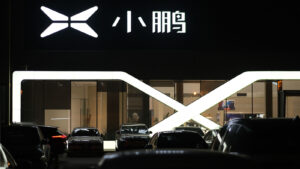 Despite worries about the Chinese economy, the China Passenger Car Association predicts that sales of new energy vehicles, which include EVs and hybrid-electric vehicles, will hit a record 6 million this year. That’s good news for Chinese EV makers like Xpeng (NYSE:XPEV), which has cratered 85% over the past year.

The automaker recently launched its new G9 SUV, which, according to Xpeng, is “the fastest-charging EV on the market.” The company expects the G9 to be its best-selling vehicle to date.

Meanwhile, Xpeng’s technological advances continue to impress. The company just completed a test flight of its flying car. While currently only a prototype, it could one day be a revenue driver. For now, it’s a clear sign of the company’s ambitions and innovations.

With a trailing price-sales ratio of 1.5x, XPEV is one of the best electric vehicle stocks to buy now.

On the date of publication, Larry Ramer owned shares of RIVN and XPEV. The opinions expressed in this article are those of the writer, subject to the InvestorPlace.com Publishing Guidelines.

Larry Ramer has conducted research and written articles on U.S. stocks for 15 years. He has been employed by The Fly and Israel’s largest business newspaper, Globes. Larry began writing columns for InvestorPlace in 2015. Among his highly successful, contrarian picks have been PLUG, XOM and solar stocks. You can reach him on Stocktwits at @larryramer.